Check out the Terror in Store this Halloween Season at A Thriller at Murray's! 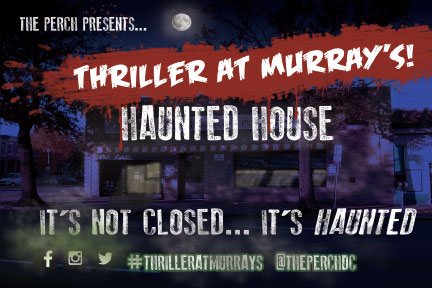 What's new at A Thriller at Murray's for 2016? Do you have any new rides, attractions, or special features that Haunt Seekers should know about?

This is our first year so we're 100% new. Were one of the few haunts happening inside the city so we're hoping all the urban ghouls and creeps will come out.

What are you most excited about for the 2016 Halloween Season?

We're excited to bring this really unique attraction to our city. We're an urban farm working on improving food access in local communities so we're really excited about partnering with local food producers and about giving back. You should come hungry and chow down on Three Twisted Sisters Burgers and sip Hemp Kettle Tea Beverages before or after the haunt. Inside, there will also be a bevy of real local artisans adding to the artisinal ambiance.

What differentiates A Thriller at Murray's from other local haunts in Washington DC?

It's truly interactive. You'll create the experience by talking to our vendors and crafting your own experience.

This is our first year but the Murry's grocery store closing inspired us to create this theme. Many people from the area remember the Murry's and, for better or worse, we're tapping into the stories and lore of that time-honored institution. We'll see what happens when you conjure the dead.

What's your favorite experience since opening A Thriller at Murray's ?

We're creating 100% of the props from recycled materials. You've gotta see it. We've freecycled our way to top notch gore.

How long is a typical haunt experience at A Thriller at Murray's from start to finish?

We think about 20-25 minutes but it will depend on how long you talk to the vendors.

Does A Thriller at Murray's 's property have any real haunted history? Do you have a spooky encounter you'd like to share?

Hmm, everyone who's helped with the production seems to think so. We've all witnessed strange things since we decided to create a haunted house. We're wondering if the real ghosts are proud of what we've done with the place.

What inspired you to open up a haunted attraction? What's your favorite part of the business?

Halloween is my favorite holiday! It's been a dream of mine for a while.

How has new technology (i.e. animatronics, special props, etc) helped you to enhance A Thriller at Murray's ?

Yes! But we won't give it away.

Does A Thriller at Murray's offer any special deals, discounts, or coupons?

Yes! There are discount codes available with our vendors and an earlybird special happening until October 15th.